A Horse Memorial for our mare Asmara 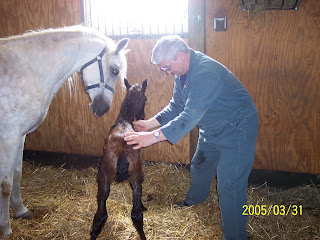 Tragedy struck us only three days after the birth of our first 2010 foal. We lost Asmara, one of our favorite mares. Hopefully, this horse memorial will leave as much of an impression on you as it did on us.

It was a gorgeous spring day and we turned out a group of five mares into the front pasture green with new grass growth. As usual, each mare dropped down to take a good roll in the grass. All but one got back up.
(Pictured: A proud Asmara admiring her last foal Asmar by Etyk, 2005.)

We watched Asmara for a few minutes and realized she could not get up, despite repeated attempts. We both went to her immediately. I could tell she was in pain - the hip area. Asmara had taken a big fall last week while running to the gate. The grass was just a little slick from rain the day before and she struggled a few seconds before regaining her feet, but walked with no lameness and had no swelling. We discovered she had abrasions on both of her hocks and washed the delicate area daily. What we didn't see was a possible hairline fracture that manifested into a full-blown pelvic fracture when her hips hit the hard ground for a simple roll in the dirt.

We stayed with Asmara in the pasture for 2 hours, keeping her comfortable with water, hay and banamine (for pain) while waiting for the vet to arrive.

Many people think animals are dumb and are devoid of feelings or emotions. Horse People know better. What we witnessed next was nothing short of incredibly amazing! Asmara's daughter, Aforia, an 18 year old mare herself, began a "conversation" with her mother. First she sniffed the old mare's hip and hocks as if she was assessing the situation. Next, she turned to her mother, and nose-to-nose, both mother and daughter "conversed". Aforia snorted and nickered to her mother, and her mother responded. Aforia then began to "guard" her mother, allowing no other horse to come near Asmara. Aforia was comfortable with Jack and me around Asmara, but the only other horse allowed anywhere near Asmara was Asmara's youngest daughter, Artima, full sister to Aforia.

Asmara's closest friend and stablemate was Sierra Nevada, imported from Janow Podlaski Stud in Poland. Yet when Sierra began to get agitated over her best friend's predicament, Aforia firmly chased her away and Sierra could now only be a passive observer. Aforia then stood watch over her mother as the vet confirmed our suspicion of a fractured pelvis and told us of the only course of action. Our hearts broke. 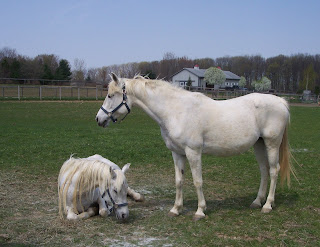 Aforia understood the seriousness of the situation. She knew this was a farewell.
She stood over her mother with the same protectiveness that a new mare shows her newborn foal. Asmara had stood over Aforia as a foal, protecting her, and now Aforia was returning the same emotion - love - to the mare she knew was her mother. 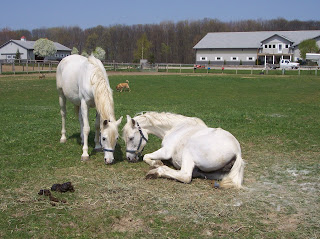 (Pictured: Aforia continues to stay close to her mother, comforing her.)

We needed a few minutes to absorb what had happened, and what was going to happen.
We looked at Asmara and she seemed to know as well. She had had a good life. She was 25 years old. Even though she had melanomas on her neck, hip, and under her tail, she lived a full and normal life. She hated being in the stall, and we were grateful that today she was in a large pasture and the sun was warm and shining on her.

Then from a sitting position, Asmara laid down, exhausted. 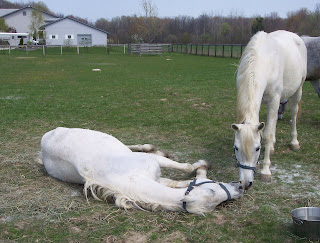 (Pictured: Aforia with her mother Asmara moments before the mare passed away.)

Jack removed all the mares from the pasture. Aforia and Sierra went willingly. Asmara struggled to get up, but pivoted around in a circle, her back legs unable to lift her body. I sat down beside her and spoke to her softly, stroking her neck. I thanked her for her beauty, her kindness, and her wonderful foals that remain on our farm.
She could see Jack and our vet coming toward her and she let out a sigh. So did I. I was sobbing. Jack broke down as he removed Asmara's halter, freeing her of any means of human control. She passed from this earth peacefully, surrounded by love. 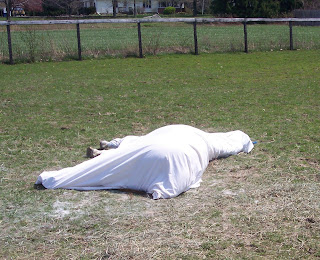 (Pictured: We wrapped Asmara in white sheets prior to her burial.)

Our neighbor, John Bailey, dropped what he was doing and came over to bury Asmara in the back pasture next to *Efort, who passed away in 2005.


(Keep scrolling down for more photos) 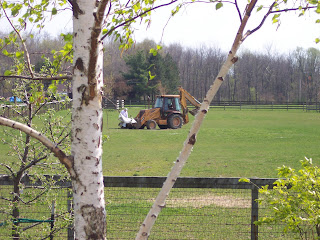 (Pictured: Jack helps load Asmara onto the tractor for transport to the back pasture and her final resting place.) 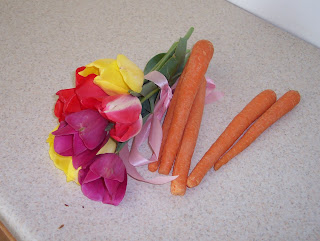 (Pictured: Tulips and carrots for Asmara. We also bury our horses with a flake of hay and oats to carry them to their next journey.) 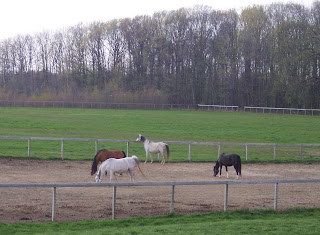 When the digging of the grave began, only one mare of the five in the paddock adjacent to the pasture looked on intently. That mare was Asmara's granddaughter Afrodyta - Aforia's daughter, who is heavy in foal and due on April 28.

(Pictured Above: Afrodyta watches as a grave is dug for her grandmother, next to the grave of her grandfather *Efort.) 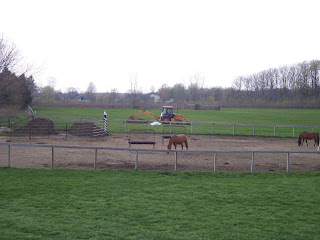 (Pictured: The backhoe digs Asmara's grave while Jack looks on. This photo was taken from the hayloft in our main showbarn.)

Asmara was kindness, gentleness and goodness in equine form. She never hurt anything or anyone. She was an excellent, loving mother and a faithful friend. And in the end, the kindness and love was repaid to her. Asmara trusted us - so much I believe, that she understood her time had come. She did not fight it, and with a queenly dignity left this world and returned to her creator. Asmara has left her hoofprints in our hearts. Even on her final day of life, she allowed us to witness and experience love. Love between horses, and love for horses. The bodily form doesn't matter - the love does. We are better people because of the gifts Asmara gave us. Not just her two daughters and one son who remain with us at our farm, but the gifts of enlightened insight into the real nature of horses.

Horses are incredible creatures who have much to teach us. I share this experience with you because it is part of living life with horses. While we are grief stricken when we loose a horse, I have learned that the greatest gift of love we can give that horse is to love another of its kind.
That's the basis for the Angel Horse Registry.