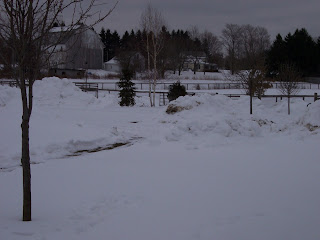 This was the farm just 2 weeks ago. Six-foot high piles of snow everywhere. Then the winter thaw began. The snow is not really gone - it's just changed form - and now it's all MUD!

Everything is muddy. We're sinking as we walk.
But that means spring is well on her way, although we're sure to get just one more snowfall this year.

The horses are aching to go outside. They've been confined most of the winter to stalls, the arena or paddocks although they do love turnout in snowy pastures. But mud presents a different problem. They will sink up to their knees in pure, solid clay-like Ohio mud in March. So we've had to wait a few days to turn the horses out. Horses do like mud - so much that they delight in rolling in the stuff, some covering both sides of their body, some only one side. And it's hell to get it off of them - we must wait until the mud dries. But Horse People delight in this task! We are prepared with all sorts of grooming tools - curries, shedders, scrapers, mane and tail detanglers. It's a messy job, but Horse People have to do it! Getting dried mud off of a horse takes muscle and tireless circular motions with both arms as we attempt "the clean up". Dirt, dust and shedding hair is everywhere. This job is not for "clean freaks". We inhale all the dust, get dirt in our hair and under our fingernails. Clothing is caked with mud. You can't wear gloves either - you need your fingers. Technically, you cannot officially call yourself a horse lover until you've willingly engaged in this task.
Muddy March signals the approaching end of winter. I'm beginning to thaw out myself and there's alot to do this year at the farm. We're still bringing in hay, unloading it and stacking it ourselves. Most importantly, Muddy March means foaling season is right around the corner. Talk about madness - we're expecting 6 foals this year! 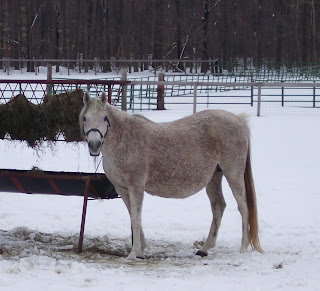 Our first mare to foal is Serrenada, sired by the Palas son *Efort and out of the imported Polish mare *Sierra Nevada by Aloes. Take a look at the baby bump! She's due April 18. I don't think she'll last that long! Serrenada is in foal to Park Horse and Halter Champion PS AfireChief. We bred her AI and we are hoping for a bay filly. Since Serrenada is a flea-bitten grey, she should produce bay color even though in Arabians, grey is the dominant color. PS Afire Chief is by Afire Bey V and out of the Chief Justice daughter Justa Glow. Chief Justice was one of my favorite *Bask sons. We consider Serrenada our best trotting mare and are anxious to bring this new blood into our herd. This will be her second foal. She gave us a nice colt in 2007 by our stallion *Etyk (Eldon x Etnografia by Aloes) and she foaled two weeks early. We're watching her closely, because broodmares are sneaky! Serrenada's friend Hennah, our *Wojslaw daughter out of Fifinellla by Probat, is due on the same day. I'll be telling you about the sire of Hennah's foal in my next post! But the best, most exclusive news is that we have acquired the great stallion Monopolii, full brother of world champion sire Monogramm!! Sired by Negatraz and out of the million dollar mare Monogramma, high-trotting Monopolii settled three mares for us last year at the age of 23!

Posted by JoAnne Mazur at 4:18 PM No comments: