We Welcome a New Foal!

Saturday, June 13th. Aforia was 10-14 days overdue. Today was the day. Almost a year of waiting was close to culminating in a heart pounding, emotional and spiritual experience.

Jack shares a special relationship with his mares. When they hear his loud whistle, they always, as a herd, run to him. As Jack approached the paddock gate he instinctively whistled to bring the mares in. If it was not too late, it would be easy to catch Aforia and get her into the foaling stall.

It worked as planned! Aforia got up and slowly trotted to the paddock gate with the herd. Within minutes she was back in her stall, the safest place to give birth!

4:51 PM. The mare continued what she started in the pasture. Circling the stall, she sought the right place to lay down. Inside her body, powerful contractions had turned the foal from laying on its back to the proper front-feet-first position.

Aforia found the right spot and quietly layed down. Jack and I tiptoed into the adjacent stall to observe. We waited for what seemed to be forever. Then we heard the water break! At 4:57 PM, six minutes after being brought from the pasture, Aforia was in labor!

The water continued to spill out as Aforia looked at her swollen belly. She knew what was next. She laid her head down, extended all four legs, and began to push. One white foot emerged. She continued to push and strain, but the small portion of the one white foot remained. Our hearts pounding, we stood motionless.

The mare got up, circled and went down again. This oftentimes repositions the foal. She started to push again - harder, with all the strength she had. Another white foot appeared and we could see the foal's nose. But the mare's rhythmic pushing could not move the foal. Jack and I looked at each other. We knew the foal had a small window of time to be in the birth canal before life-giving oxygen would be cut off.

Jack moved towards Aforia's stall door, quietly opened it, squatted down, and moved to the back of the mare, the entire time reassuring Aforia with a soft voice. She understood. She trusted Jack.

I followed Jack and squatted outside of the stall. "Remember Jack, you can only pull when the mare pushes", I said, "I'll tell you when to pull."

Aforia got down to business. She pushed and pushed, her face in a trance. And with each push, Jack, who had the two white feet in his hands, pulled. We soon saw the foal's head. And with one more push from the mare, the shoulders appeared. 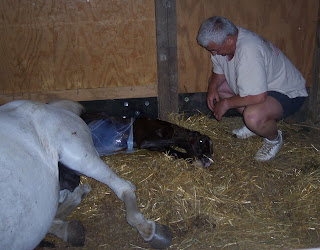 We both knew the hardest work was done. The large chestnut foal, marked with four even white socks, a star, and narrow strip down his nose, took his first breaths of air as Jack pulled the white amniotic sac away from his face.

This is an especially emotional moment for Horse People. To witness the miracle of a birth - the perfection of its design and process - to actually see life breathed into a creation of God - this is a spiritual experience for which we are always grateful to share.

Tears aside, Jack and I watched the mare rest as the final pint of life-giving umbilical blood made its way into the foal. Aforia, filled with overwhelming maternal love, nickered softly to her new foal. 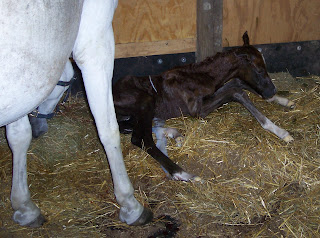 The mare stood up. At that moment the umbilical cord automatically separated mare and foal. Aforia began licking her foal to dry the soft foal coat wet from its watery environment. Jack began to remove the rest of the amniotic sac. We welcomed Aforia's son to the world!! She had delivered a fine, strong and beautiful colt at 5:14 PM! 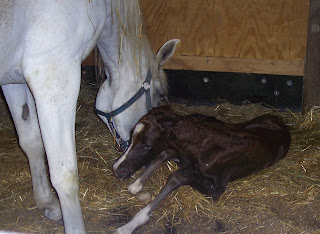 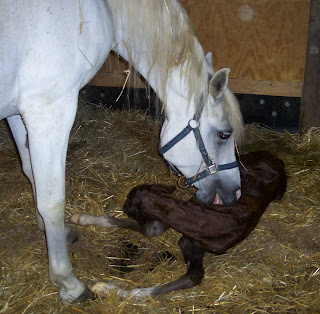 Labels: A broodmare gives birth, birth of a foal, foaling