The New Foal Needs a Name 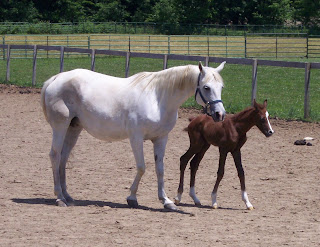 It's been a week since Aforia's foal was born. It's like having a newborn baby in the house! The foal found those long wobbly legs and stood up for the first time with Jack's help. He quickly learned to nurse - in fact, the quickest of any foal I've ever seen in over 20 years of foaling out mares. This guy is smart - and hungry!!!
The first turnout is always exciting. The mare is extremely protective but very proud of her foal. We decided to turn Aforia out into the paddock next to her mare herd and welcome the foal to the warm sunshine and fresh air of earth. As we led the mare out of her stall, the colt was confused. He did not want to leave the stall, which made Aforia very nervous. I gently put my arms around him - the left arm on his chest, the right arm under his tail, and "walked" him alongside of his mother. Once safely inside the paddock, we watched as all the mares in the pasture stepped up to the fence and greeted the newest member of the herd.
Aforia then proceeded with the first lesson. She walked the foal completely around the area, putting herself between the fence and her foal. Around and around they went, first at a walk, then at a trot, the mare gently nudging him when neccessary to move him in the direction she thought best to take. Within minutes the foal learned his lesson well. Follow my mom. Closely! Wherever she goes, I must go! And so when they returned to the stall, the colt stayed right by his mother's side and followed her into the barn! 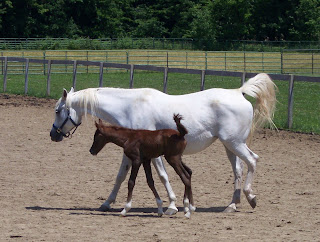 It's time for a name! We like to observe our foals for a few days to get an idea of their personality before naming them. And we continue the Polish Arabian tradition of naming the foal with the first letter, (and most of the time the first 2 letters) of the mare's name. It makes it really easy to remember pedigrees this way. So we need to find a name that begins with A-F.
We've been turning out the colt every day now. He gets cockier and more confident each day. And he loves to canter! It's either full speed or walk. Nothing in between. He's already developed an attitude of his own. Proud, bold, in command. We need a special name! The colt's sire, Legion VF, is the last son of the immortal Polish Arabian stallion Bandos who sold at age 18 for one million dollars, purchased by California publisher David Murdock's Ventura Farms. Legion's dam, Garnet, was an esteemed daughter of famous Polish Arabian sire*Bask, and a full sister to champion sire Gdansk.
Now, I like to give foals names with special, spiritual meaning. Jack, on the other hand, likes names that convey strength and might. In other words, military names. We're both online studying the "baby names" sites. These are great sites because they list names from almost all countries and nationalities, as well as what the name means. I'm looking for something proud, independent, yet sensitive. Jack is looking for fighters and warriors!