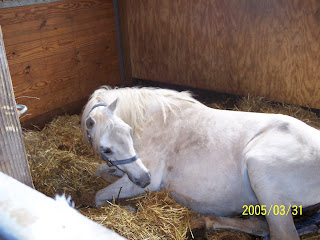 (Pictured Above: Aforia's mother, Asmara, preparing to give birth to her last foal Asmar.)

Friday night's foal watch was tiring. Aforia was agitated and was pacing in her stall. Clearly uncomfortable, she circled around and around, stopping only momentarily to grab a few bites of hay. We thought for sure she was ready. But as dawn approached, she grew calm and we were weary.

After her morning feeding, I noticed dripping milk, a sure sign that birth is hours away. I decided to work in the garden behind the mare barn and keep a watchful eye on the mare in the stall. Around noon, Aforia once again became extremely agitated. She kicked her stall, pushed on the stall door, circled and called out to her friends in the large pasture. Something just wasn't right. I finally called Jack around 3 PM, thinking she would go down at any time and start pushing.

This behavior was quite unlike Aforia's usual calm pre-foaling demeanor. "She wants to be with the other mares," Jack said. "I'm letting her out in the pasture." I gasped! "Jack, let's think about this....if she foals in the pasture, there will be no way for us to help her. The foal may get hurt by the other mares....and then there's the problem with the dogs being around her as well..." I pleaded. "She's cleary upset and we have to keep her calm", Jack replied, "and besides, she'll come to the gate when she's ready".

He lead the mare to the paddock, unsnapped the lead rope, and off she galloped into nine acres of lush grass joining eleven other mares. My heart raced. I looked at my watch - 3:35 PM. "I have my cell phone - I'll watch her, and call you if she goes down. But I don't know what we'll be able to do", I said sadly. "I don't think she'll foal until tonight", Jack said, as he walked away.

I went back to my gardening, keeping a watchful eye on the mare. She would grab a few bites of grass, then pace; grass, then pace, visably nervous. Suddenly I saw her go down! I grabbed my phone then hesitated. It was a normal "horse roll" - rolling first on one side, then the other; then up on all four feet immediately followed by a good whole-body shake! False alarm! Back to the garden. 4:15 PM.

The sky was beginning to turn dark. A storm was approaching. Strange, this was not in the weather forecast. But the wind direction had clearly changed and the air was becoming heavier. I searched the pasture to find the mare. She was circling, preparing to lay down. My heart was pounding. I knew that mares often foaled during storms. And it looked like a big one was approaching. Just as I went for my phone, Aforia laid down and assumed the birth position, all four legs extended out. "Oh God, " I prayed, "please protect her".

Jack answered my call. "She's down, she's ready," I screamed. Within seconds he was at the paddock gate.